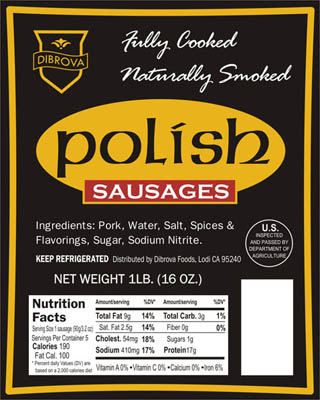 Salt and black pepper to taste

Grill sausages over medium heat until well browned, about 10 minutes.

Meanwhile, heat the oil in a large skillet over medium heat.  Add sliced onions and peppers  and gently sauté, stirring every few minutes, until vegetables are soft and lightly brown – about 15-20 minutes.  Remove from heat and season to taste with salt and pepper.  Sprinkle with parsley.

Split French rolls in half, but do not cut all the way through.  Serve sausage on the roll topped with peppers and onions.

4 or 5 links Dibrova Polish Sausage, cut in half lengthwise, then sliced

1 small zucchini, cut in half then sliced

½ tsp. salt and pinch of pepper

Preheat oven to 350 degrees.  Lightly oil a 2-quart casserole and set aside.

Heat oil in a large skillet over medium high heat and sauté sausages for about 5 minutes until lightly browned.  Remove sausages from the skillet into a bowl.  Pour off all but 1 tablespoon of the fat remaining in the skillet.

In the same skillet, sauté the onion and red bell pepper for about 5 minutes, stirring occasionally.  Add the mushrooms and zucchini and cook for about 4-5 minutes longer

Stir in the rice and mix lightly to make sure it is well coated. Add chicken stock, basil, salt, pepper, parmesan cheese and sausage. Bring to a boil. As soon as it comes to a boil pour all of this mixture into casserole dish and cover tightly with foil.

Bake, covered, for 30 minutes.  Then uncover, sprinkle with swiss cheese and parsley and bake uncovered for 10 minutes longer or until all liquid has been absorbed and rice is tender.